Hello, I am Carlos Devizia from Argentina, and today I will write about reverb.


Reverb is a very useful effect, which belongs to the category of "Delay Effects".  We can use it to re-create a real space or to create an exotic sonic environment, not necessary inspired in the real world.


Usually, when we record an instrument, we tend to isolate it, to remove reflections in the room and remove as much noise as possible. Though, this is useful at that stage, to record the best signal possible; in the final mix, this kind of sound results unnatural. So, we can use reverb to create the correct space for our production. As we said earlier, we have different approaches to it. We can re-create a natural space, a completely fantastic atmosphere, we can use reverb to separate the instruments in different stages, like if some of them were closer than others, we can define a common space for all the instruments as if they were recorded in the same room and at the same time, etc. We can be completely creative here.


As all the effects in this category, reverb has some basic parameters to care about. The delay time is the amount of time from the input to the output of the signal, the dry/wet control balances the delayed and undelayed signal and feedback determines how much the wet signal is routed back to itself.


Reverb units are divided in two categories: algorithmic reverbs and convolution reverbs. The first one uses a kind of formula to create the effect. An algorithm is a step by step procedure, a series of rules defined to produce a certain activity to achieve a concrete result. This is the way this kind of reverb works. On the contrary, convolution reverb works based on a recording of a real space that you apply to your sound file.


Both types have their strong and weak points. Convolution reverb is great to re-create real spaces, because you are applying to your sound a record of a reverb made in the real world, however it is limited in the way you can manipulate this. Algorithmic reverb, on the contrary, offers an incredible amount of manipulation possibilities but is does not sound as realistic as convolution reverb.


We´ll take a look at both, we use a couple of plug-ins for our examples, and it is important to say, that though from plug-in to plug-in the names and locations of the controls may vary, the concepts are essentially the same. You may find that some plug-ins have more controls than others, but the main features remain the same. So, no matter with VST you´ll be using, if you understand the main concepts you´ll be able to work with your favourite reverb VST.


They are usually divided in two separate components: the early reflections which are a series of short delays and the difuse reverb.


In the early reflections section you´ll find a pre-delay control, which works on the beginning on the entire reverb delaying it a little bit. We also can manipulate the space with a control named room space, room shape or a similar name according to your particular plug-in, and that will help us changing the location of the early reflections.


In the difuse reverb section you will control mainly the time parameter. This will affect the size of the room your sound is in. The high end (also high cut, damp, etc.) parameter controls the materials of the room (Some materials reflect the sound better than others, and some are softer than others and this affects the way the sound propagates).


According to the different plug-ins, you may encounter different options and possibilities, like pan controls to panoramize the reflections to the right or to the left, a freezing control to avoid the decay of the reflections, some EQ filters associated to the reverb, to enhance certain reflections on certain frequencies and attenuate some others, etc.


Let´s hear a couple of examples of algorithmic reverb applied to a short fragment of music, in this case played with an alto sax. The first sound shows the dry sound and then the sound processed with different reverb settings. All the examples in this writing do not intend to be musical, they aim to show differents effects achieved by the use of reverb. 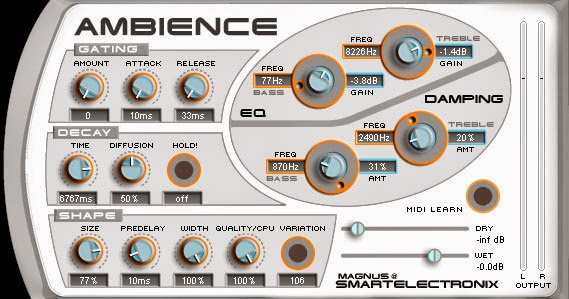 
In this type of reverb we choose an impulse response, which is a file containing a record of a real reverb that we will apply to our sound. Usually convolution plug-ins have several files associated to them and there are also sets of files on the web downloadable to use with convolution VSTs. The interesting thing about this is that you have an incredible amount of impulse responses available for your use, from very realistic ones to totally strange things. The trick here is to imagine in which space you would like to hear your music and based on that selecting your impulse file. Thus, your music can sound as if it were played in a small room, in a concert hall, in a big cavern, etc. In a convolution plug -in you´ll also find some controls to manipulate the reverb. 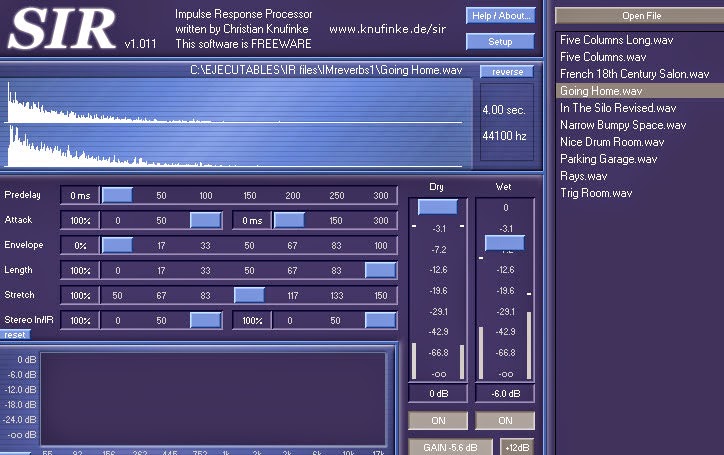 In both algorithmic and convolution reverb you´ll also have the dry/wet control to mix the signal without reverb and the processed signal. The dryer the sound it will sound closer to the listener and the wetter , it will sound far away from the listener.


Reverb is in nearly every element of modern music production, so it has a dramatic impact on the final results we will achieve. Changing the way we apply reverb will change our final sound, so, the more we know reverb and the way it works the more our music will be sounding in the way we want. A good starting point for using reverb is being subtle, unless we are doing something crazy on purpose, subtle adjustments provide great results.
Publicado por gamilon en 18:48