Hello, I am Carlos Devizia from Argentina and our today´s topic is "Envelopes".

As we know, in a synthesizer, sound is generated by the oscillator, then it goes to the filter section and then to the amplifier. This amplifier is designed to change over time and it is modulated by the "envelope", which is basically a path that runs every time a key is pressed. (envelopes can modulate other things on synths, but today we will focus on the envelope as modifier of the amplifier).

The envelope controls how the volume of the amplifier reacts over time.

It has four parameters that are:

Attack time: every time you hit a key the envelope will run from zero to full value. The more the attack time is increased, the slower it will ramp up. Let's hear what happens with sound if we change the attack. I will play a sound with no attack and then I will gradually increase the attack. (notice that in the case of synthesis, "attack" has a meaning that could be considered opposite to the "attack" meaning if we talk about performing an instrument).

Decay Time: after it reaches full value, the envelope will decay to reach a sustain level. Let´s hear some variations in decay, once again increasing it gradually, I will let the sustain level not too high to make the effect of decay more obvious).

Sustain Level: (notice that this parameter is not related to "time" as the other ones, but is related to "level") It represents the steady state where the note stays while it is being held. Once again, let´s hear an example.

Release time: is the time that the sound needs to reach zero, after the key is released. Let´s hear the effect of "release" in a sound. I will hit a key and release it quickly several times, gradually increasing the release value. The longer this value, the longer it will take to the sound to fade out.

Let´s look at some common envelope shapes and after that, an example of them in a musical context. For this task I will use the excellent freeware synth TAL - Elektro II. I will focus only on the envelope section as this is the focus of this writing, and won´t speak about the other sections of the synth or the parameters involved in the creation of these sounds. 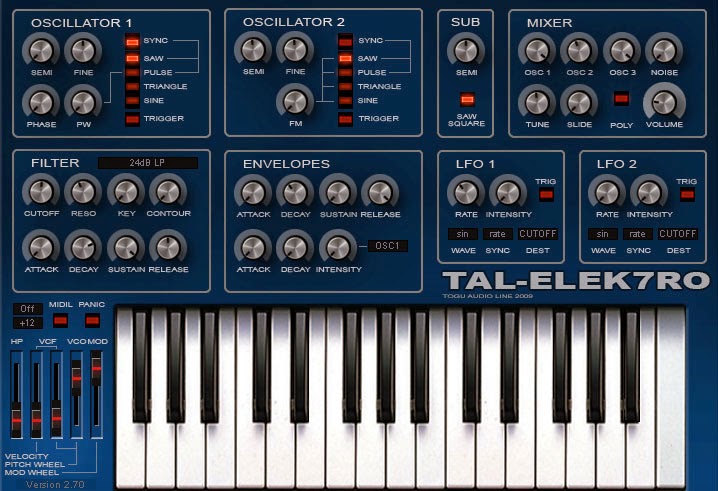 I will speak a little about the characteristics of each type of envelope , and after that I will post an audible example of them.

Switch envelope: It has a fast attack and a fast release, in this case decay does not matter so we´ll put it all the way down and sustain will be at full level. This kind of envelope is great to create sounds that resemble organs, for example. (please, notice that in some synths, an extremely fast attack and release will produce an audible click, this can be solved by increasing a little bit their values).

Sustaining: in this case, the note is sustained and receives energy while the key is pressed. Think about a bowed or a blown instrument, as long as the player moves the arc or blows in the instrument, the instrument will sound.  It has a strong attack, decay and release and the sustain level will be somewhere in the middle. Reducing the decay time will produce a sound with more punch.

Damped Percussive: this case is the opposite to the sustaining envelope. Think of pressing a piano key, for example, the sound does not sustains and falls to zero, as no energy is added to it. If I release the key while the sound can still be heard, it will be cut abruptly. On the contrary, if I maintain the key pressed the sound will reach zero gradually. In this kind of envelope the sustain goes all the way down, and the duration of the sound is managed by the decay time.
For the following example, I created the sound by pressing the key and releasing it quickly and then pressing the key again and not releasing it letting the sound fall. Please, notice the audible difference.

Quirk: this last type of envelope is unusual. We must have no attack time. We must get the sustain level all the way down, reduce a little the decay time and increase drastically the release time. By doing this, if we play a short note we will obtain a long sound, and if we keep the key pressed we will obtain a short sound, which seems contradictory, but the explanation is that the release time begins right in the moment you release the key.
This last type of envelope, does not have a common use in musical production, but here I made a little phrase using it. When the sound is longer I pressed and released the key quickly, when the sound is short, I pressed the key and stayed there. In my opinion, this type of envelope, could be useful for some random results or experimental performances.

Now, let´s listen to the previous examples in a musical context. This is a rough sketch of a theme I will work on. I added a couple of effects and pan to the sample to make it more musical, but apart from that, all the sounds are from TAL - Elektro II using the envelopes we talked about.

Knowing envelopes will help you create the exact sounds you have in mind. If you want to create an organish sound you´ll probably will use a switch envelope; for a bowed string instrument like a violin or a blown instrument like a saxophone, you´ll use a sustaining envelope; for a piano, a plucked string or a percussion instrument sound you´ll use a percussive or damped percussive envelope. But most important, you´ll be able to create unique sounds that are in your mind. How about a martian cello? or the roar of a space monster? or the chant of a mermaid? If you have it in your mind, knowledge of envelopes will give you the opportunity of doing exactly what you want while creating a sound, not depending on luck but depending on your criteria to do it.
Publicado por gamilon en 9:20